It’s a productive, stable work-at-home career that’s been around for more than 30 years… yet most people have never even heard of it.

You can even type “scopist” into Merriam-Webster’s online dictionary, and this happens: 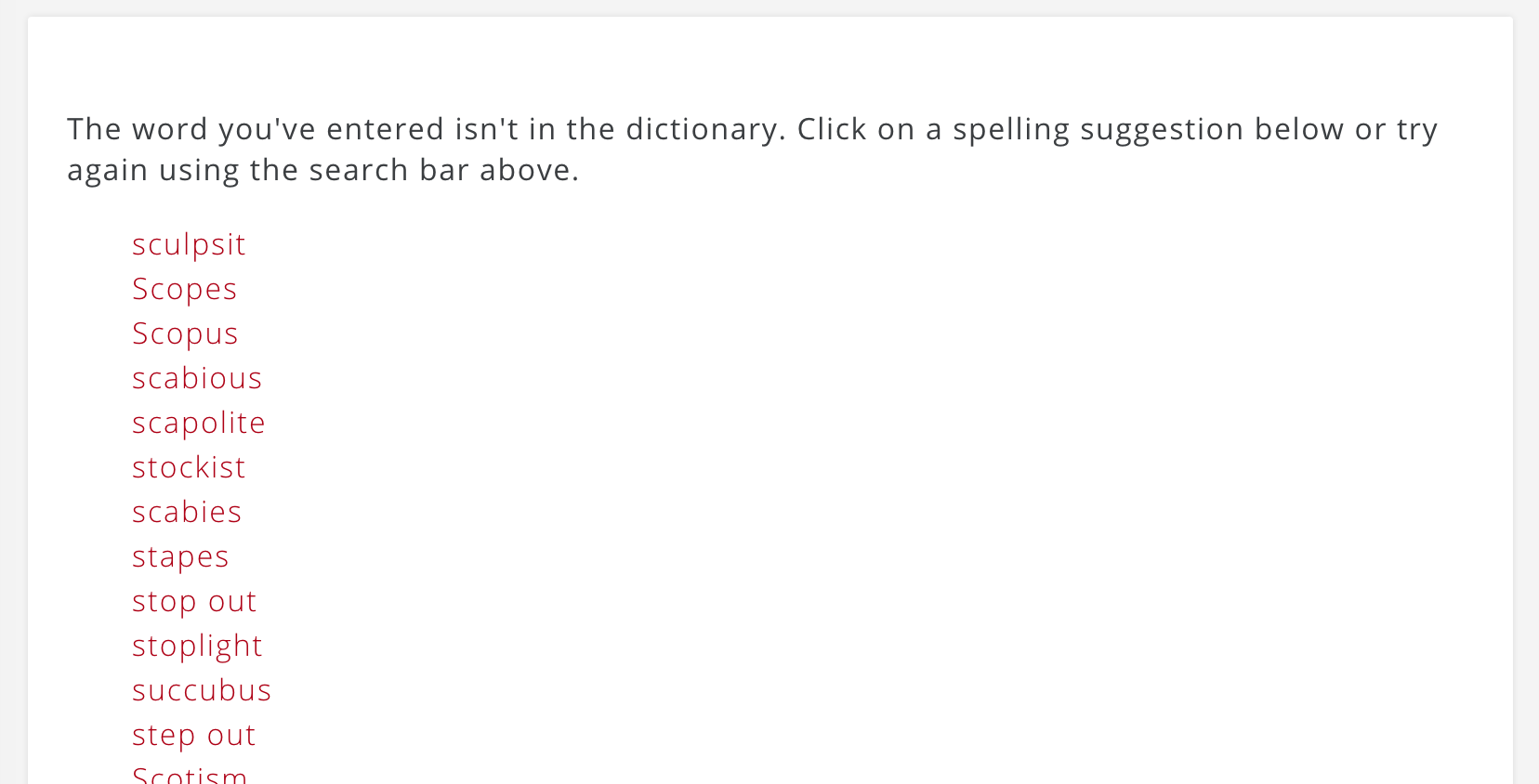 Scoping is editing transcripts for court reporters. Court reporters write or “take down” proceedings using steno writers. They import their steno notes into computer-aided transcription software that translates the steno into English.

Court reporters then hire scopists to help them save time in the editing process. A court reporter makes money per page, not per hour, so the more pages he or she can take down, the higher their earning potential.

Not to be confused with a proofreader (who goes to work post-editing), a scopist uses the same software along with audio to edit the translated steno. He or she ensures all the steno language and punctuation is translated properly to make the verbatim record as accurate as humanly possible.

For word nerds and people who love language, this is BIG FUN.

It requires major finesse with words, and you need to learn to read the steno language — which is actually much easier than learning to write or type in steno.

Scoping can be done at any time of the day — in almost any place of your choosing.

That means you can work from home.

You can work on vacation.

You can even swap houses with a family in Tuscany or Florida for the entire summer and still make money.

Scopists use a laptop or a desktop computer outfitted with scoping software which, while on the surface may seem “expensive,” is a totally tax-deductible business expense that more than pays for itself — and quickly.

You also need a reliable connection to the Internet in order to receive your work and some headphones to listen to the audio… and that’s about it.

Remember how I said court reporters are paid per page? Well, so are scopists.

Unlike many professions with similar earning potentials (that often lack flexibility!), scoping does not require an expensive degree, nor does it require certification testing or CEU’s. It does require training, but scoping training costs a mere fraction of what a single year would cost at a traditional college.

That’s why I say that on the surface, scoping start-up costs (education + equipment) may seem expensive, but it’s actually inexpensive when you compare it to what people usually pay to begin their careers.

Thing is, most people don’t think of education as a start-up cost… but that is exactly what it is. Make no mistake: degrees are huge start-up costs… and sometimes, both the financial and time costs don’t justify the payoff.

For example, you can’t become a teacher without a teaching certificate, which requires some kind of bachelor’s degree — so lots of money, but also lots of time. Teachers earn between $30,000 and $50,000 a year, just like a scopist.

The difference? Well, the scopist would pay $2,000 to $3,000 total for their education, whereas the teacher would pay between $18,000 and $100,000 for their entire four-year program tuition alone… and that depends on the school. Low-end colleges obviously charge a whole lot less than mid-range schools with solid reputations.

We won’t get into how many hours a teacher has to work to earn their salary.

Now, before I open myself up to any hate mail: God bless our teachers. This post isn’t meant to scorn them — we need them! It’s just a simple comparison. And truly, it’s not just teachers who shell out a ton of cash and time to be able to earn a mid-range salary.

Don’t believe me? See Salary.com’s list of jobs earning $30,000 to $50,000 annually. I’d bet your bottom dollar most, if not all job ads you’ll see for these positions require a bachelor’s degree, some type of previous professional experience, and you have to sit at a desk to do the job.

Most people take around six to eight months to learn scoping and start earning. Many of my students get their first clients the same week they graduate. That’s a stark contrast to what you see each May and December, when large droves of 20-something college graduates officially qualify for mid-range salaries.

Compare that to our teacher friend. He or she not only spent a lot more money for their education, he/she also spent four years or more of their lives just to get the degree… then there’s the waiting game and the competition to actually find a job.

The cost to become a scopist literally pays for itself.

So Why Haven’t You Heard of Scoping?

Scoping has an earning potential that’s just as high as that of a bachelor-degree holder, but without the added cost in money and time. Then there’s the added benefits of working from home — or anywhere — and earning just as much as someone who commutes.

Scoping is obviously an attractive option to work from home… so why haven’t you heard of it?

The answer lies in the industry of court reporting itself.

Court reporters work behind the scenes. Many of them are freelancers themselves, and they hire scopists as contractors on a freelance basis. This means you won’t see any ads on Monster or FlexJobs about a company hiring scopists.

This is good news! It means there aren’t thousands of applications flooding in for a mid-level earning position.

But it also means not just anyone can apply. To be a scopist, you actually have to know the industry, know how to do the work, and know how to navigate within the court reporting community in order to find work. That’s why you need training.

Not Just Anyone Can Scope

In fact, scoping is pretty advanced work. It’s fun, don’t get me wrong — but it takes skill. It’s not something any Tom, Dick, or Harry can learn on the fly just because they have a degree in English. That English degree will help, but you didn’t learn to scope in college, and you’ll need to learn it in order to be successful.

This is actually more good news. It means that the job market for scoping will never be saturated. Similar to court reporting, scoping is somewhat difficult and specialized, meaning not everyone will have the guts to pursue it and stick with it for the long term.

But for those who do… cha-ching! Scopists have a lucrative skill that’s in-demand for the foreseeable future and no shortage of work, plus the flexibility to work anywhere at any time.

It’s TRUE FREEDOM. And if you ask me, only the people who are willing to work for it deserve that kind of freedom.

What exactly is a scopist?

How do I know if I would be a successful scopist?

Is the scoping profession a viable career?